I'd like to share the story about DownThunder with you. I can’t promise that it won’t be long as I am writing this right now but in the end it’s your decision alone of how far you want to read. So grab a cold one, put on your reading glasses and get comfortable. :)

How it all began

Back in the days when people wore onions on their belts and sliced bread hasn’t been invented yet… oh, wait … someone rewinded the tape too far. Let’s leap ahead a few decades. *Spools tape*

It was during the beginning of the sweet summer in 2011 when I bought my very first four-wheel drive. A pure, nearly virgineus and shining white Mitsubishi Pajero NL 1998 called Daisy. I almost immediately felt in love with driving “Miss Daisy” and it didn’t take much longer to go on our first offroad-adventure. Nah, I gotta be honest here. It was some really tame offroading in some forest. But there were a couple of ruts and hills and … a lot of trees which made it really exciting for us newborn offroaders. Soon enough my friends and I started to discover rougher and tougher terrains like the Glasshouse Mountains or the tracks at Ormeau. We also really got the hang of camping on the islands around Brisbane, which became almost a monthly thing.

Now, you make a lot of friends on these small adventures and it’s almost unavoidable to not discuss 4WDs at the camp fire. During the usual shit-talk plans about modifying our cars were made. So we checked out other peoples rigs and it didn’t take very long for us until we looked into suspension lifts, wheel sizes and bullbars.

For some friends it was easier to find a wide range of aftermarket parts than others. The reason? The make and model of the 4WD. While there are bucket loads of modifications for Hiluxes, Jeeps and Patrols it didn’t look too bright for my Pajero - simply as it wasn’t seen as a highly modifiable off-road vehicle. Thanks to forums like pajeroclub.com.au I found some fellow owners who shared their knowledge about lifting and tyre options but it still wasn’t very easy to find feedback and photos of 4WDs with specific aftermarket parts and lifts.

I really wanted to be able to punch in a few numbers on lift kit and wheel sizes so that I could for example see how a Pajero with an ARB bullbar, a 2-inch factory lift, a 3-inch suspension lift and 33” mud tyres would look and drive like. I wanted to know what specific parts where out there that allow all these mods so that I don’t end up with a bunch of paperweights that I couldn’t use because they were unsuitable for my car. But there was simply nothing out there unless I wanted to spend countless hours on google images and forums … which I did.

Well, this was it. This was the reason that set the the gears in motion which created the idea of DownThunder - a visual, searchable database of modified off-road cars.

A minimum viable product … sort of

Although I worked in at least seven different professions during my life my main profession and passion is web design - slash - web development. I dislike manual and repetitive tasks, I hate computer interfaces that either scare or bore people to death. But I love to give the computer user interactive playgrounds, reward them for their interactions and genuinely try to excite them.

I love to connect different data elements and visualise them in the way that a normal human could easily grasp the truth that lies in them. I also love to find patterns in repetitive tasks to automate them so the computer user gains more free time for … coffee … and … facebook ... and driving their 4WDs of course.

It didn’t take long I couldn’t withstand the urge anymore to at least start to outline something that would be able to let people search and find specific four-wheel-drives. The first thing I did was to search for a commercial database file that contains all cars on models on the planet with their specs so I had at least something to fumble with. And I found something quickly. I came across an sql file that contained about 60,000 vehicles including their technical specifications and had cost a couple of hundred bucks. That was the beginning of DownThunder.

Just two months into coding and designing right after I bought that database I had already a working system that contained a detailed search mask for vehicles on the homepage, car and user profiles and a forum. Another 3-4 weeks later I finished the registration pages, logo design, the ability to create photo albums and I built a very flexible user notification system. So far I have written everything from scratch besides a few javascript plugins that would handle image uploads and browser compatibility.

Now there is this term which I mentioned in the product, MVP. It stands for Minimum Viable Product and describes a thing which is, despite being in an early stage, sufficient enough (in its promise of what it is supposed to do) to be shipped.

Now to be honest, DownThunder was freaking way beyond that MVP stage already . I had already coded so many unplanned features, changed the design of the interface a hundred times, reworded every single sentence on the platform to make absolutely sure everyone understands it, fixed bugs, tested, introduced new bugs, retested. Small anecdote, mathematics for developers are underlying different rules: If you have 100 bugs and you fix one bug, what do you have? 105 bugs. ;)

It was a ridiculous amount of late night shifts but I enjoyed it. My partner Miyao is very forgiving and she took care that I was always well nutritioned and hydrated. ;) One day I just had enough. I memorized a famous quote from the late Steve Jobs: Great artists ship! So one night I decided to finally roll it out. I had to swallow my pride and overcome my fear of releasing a product that might not be good enough. But how would I ever know if I never showed it anyone. And so I did it. No announcements, no marketing - I kinda just hit the start button and made the website visible for everyone. That was on the 18th of October 2013.

In the following months I was busy with getting the word out. I made friends with other groups, printed stickers, put a big vinyl sticker on my car and started socialising on facebook. The platform grew quickly and I made very good friends on the way. There is Peter Bessell from pajero.com for example. He’s been very supportive and has started to fill the forum with life. His “Great camping recipes” thread has just clocked around 116,000 views and is the most read so far in our forum. 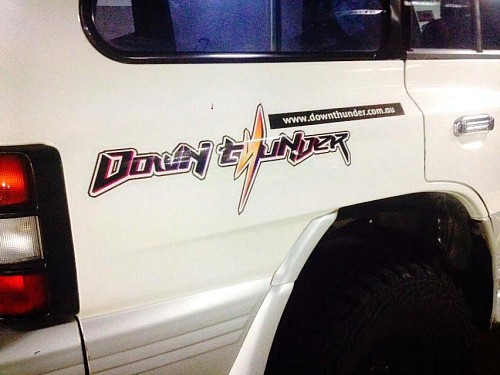 And then the internet changed

Modern smartphones have completely changed the way how people are using the internet. And it has actually affected DownThunder. While in 2013 more than 80% of our visitors have been surfing from a desktop computer, this year the number has dropped to under 30%. Although I expected some ratio change I was very surprised seeing that more than 61% of our users are now either visiting DownThunder either with a smartphone or a tablet. That would have really stressed me if … I wouldn’t have started to redesign and redevelop DownThunder 2 years ago. 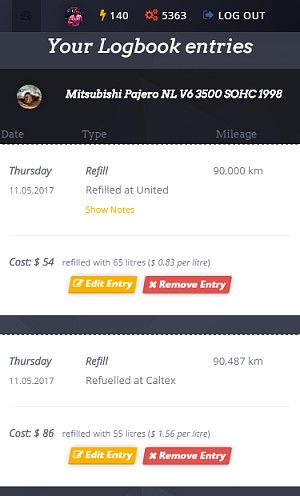 It has been 2 long years

A huge trend wave called “mobile first” has already hit the internet. People started redesigning their blogs and websites to give users on smartphones a better experience. I was quite fascinated about that topic and finally had a reason to look deeper into this rabbit hole. The decision was easy and the mission clear. The new DownThunder version needed to be responsive so it would work on people’s Android phones and iPhones if we want to attract more members and be useful for everyone who doesn’t have access to a computer.

In the beginning of 2015 I started to redesign the platform from ground up. I had no idea what I had put myself into. In order to truly work great on the form I had to restructure the whole thing hat to toe. Everything had to work and look nice on big desktop screens but also great on phones. DownThunder was in need of a modern and very defining design. And because I wanted to be thorough I started to create a new logo set for DownThunder too. The logo itself was actually rolled out early last year together with new stickers and T-Shirts just to show our users and members that we are updating stuff behind the scenes. 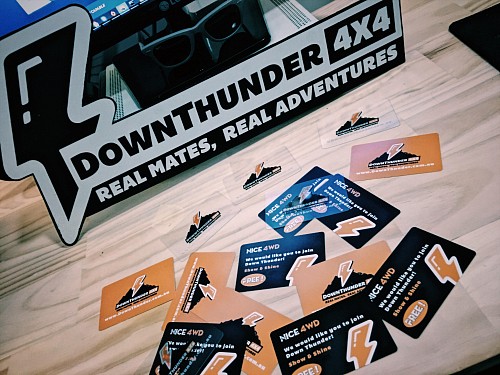 Now with the redevelopment we also asked members and friends what useful features they would like to see. One of those things is the new Car Logbook which lets members keep track of their services, oil changes, fuel and parts purchases and can help to get a full vehicle history. Another new and much wanted feature is the location database where users can submit 4WD Parks, Campsites, 4WD Clubs and Mechanics and where everyone can share their reviews and pictures.

Okay, this article is getting longer than I thought. ;) Let’s make it short now.

I want to to thank every friend (looking at you Izzy, Bastian, Normy, Adam, Ziggy) who has kicked my ass during the last two and a half years telling me to get it done already. I’d like to thank the great members of our community who are always up for a good chat and helped me to keep my chin up (ie. Dan, Scott, Pete, Adrian).

Blake and his team at Netorigin deserve a praise as they are always helpful with my support tickets and who actually sponsor part of our server since nearly 4 years. And a special thank you to Miyao which has so patient with me during these long nights and countless weekends where I stuck behind the screen. ;)

Welcome to the major release of DownThunder v2.0*. We hope you enjoy the stay and hope you give us a shout out in the forums or on our facebook page. :)

*Don’t worry. We will keep releasing bugfixes and more features throughout the whole year.