Terrorists specialized in suicide bombings all over the world are reportedly starting to speed up their game with rather unconventional equipment. In the past these "baddies" (quote Tonee Erbott) have been using simple explosives based on chemical compounds or gasoline to do their "job". But since getting hands on those resources is getting harder every day and reliability issues they had to find new ways of blowing things up.

We learned that famous Terrorist leader "Weird-al Qa-Boom" was the first to discover the power of the Nissan ZD30 engine:

"We were looking a long time for a more reliable substitute for our suicide squad. Look, my guys often have problems with their dynamite belts. The triggers are often stuck because of the sand and dust and the desert. Mobile phones never really work because of the bad reception here. So we are often wait for the big boom but then nothing happens. That are sad days.

Through a twist of fateful events we happened to get a huge load of Nissan Patrol vehicles for our fleet. We actually wanted to use them to drive around town, doing our groceries, transporting missiles, our wifes and goats you know. But we were quite surprised when our grease monkeys found out that those engines blew up one after another - just like clockwork. My computer guy was digging the western internet and found out that we got a ship load of 3L grenade engines which are proven to detonate at exactly 200,000 km. So we lined them all up at exactly 199,990 km and keep them in our garage for the next assault. God himself must have aligned stars for us!" 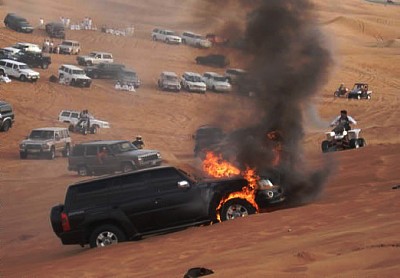 Since this incident the sales for Nissan Patrols GUs in the Middle East are sky-rocketing and Nissan is having a hard time to keep up the production of the ZD30 Grenade engine. Rumour has it that other vehicle manufacturers are looking into inventing features to make their products more attractive for terrorists as well. Chrysler for example has reportedly added a "hack my Jeep" feature which lets terrorists take control over a car and use it as a weapon.

It's just a matter of time until other vehicle manufacturers will follow.