The Nissan Patrol, famous for its heavy duty and nearly unbreakable live axle suspension hasn't gotten much love from offroad enthusiasts lately. Mostly due to its change to an independent axle transformation and bulky exterior which made it somewhat less offroad-worthy.

Now Nissan heard and listened to the prayers from the 4-wheel drivers in the Middle East and decided to bring a new, old shaped Nissan Patrol out of their factories and they call it Super Safari 2017. As already mentioned, the design has been rolled back from the recent models and looks more traditional, rugged and capable. But don't let your eyes fool you, it has gotten an overhaul and received a number of upgrades and enhanced features. 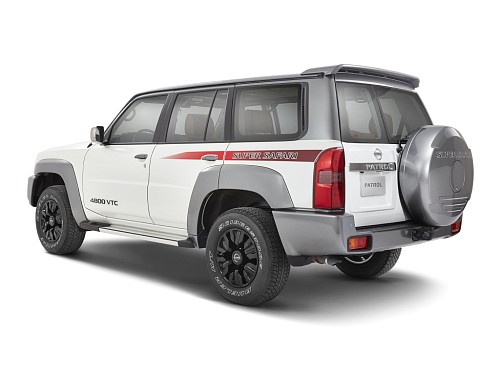 This edition comes with wide flared fenders, dual tone paint job and "Super Safari" decals. But that's just the outside shell. Inside throbs a 4.8 Litre heart with Dual Overhead Cams that produce 280 horsepower and 481 Nm of torque, paired with a 5-speed automatic transmission. That should get one out of most troublesome terrain. But if not, Nissan threw in an electric winch into the package together with front and rear tow hooks and a rear locking differential.

"The Patrol Super Safari's return is the direct result of customer demand for this legendary vehicle that has a strong heritage with the deserts of the Arabian Peninsula. Widely considered as one of the few truly all-terrain vehicles of modern time, the Patrol Super Safari continues to impress with its inherent ruggedness, durability and ability to cope with the extremes of the varied terrains and temperatures prevalent in this region", commented Nissan Middle East's Managing Director, Samir Cherfan.

Right out of the factory the Nissan Patrol Super Safari comes with big 285/60R18 shoes mounted on 18-inch rims. To keep them firmly on the ground the new Nissan comes with heavy duty coil springs and heavy duty telescopic front and rear shocks.

So what else does it feature? Electrically adjustable front seats, refrigerated cool box, Bluetooth, USB, navigation system and a reversing camera.

Now the bad news. This new, old Nissan Patrol is currently only available in the Middle East. Australians are missing out and there is no talk at the moment to bring it to Down Under. We're truly sorry about that but we will keep you updated if things take turns.

More pictures in our gallery: https://www.downthunder.com.au/mates/1mak/albums/494